TWT’s sponsored ride across the Waterberg on horseback, as well as TWT’s cycle ride through Norfolk on 12th March 2016, received favourable coverage from Marlene Vermaak in South African newspapers including Die Pos (above) with a colour photo in The Post:

Marilyn Cook wrote about TWT in The Source – the magazine of St John’s Church at 24 Rivers in the Waterberg – and we have a photo in the letters page of Cotswold Life, July issue: 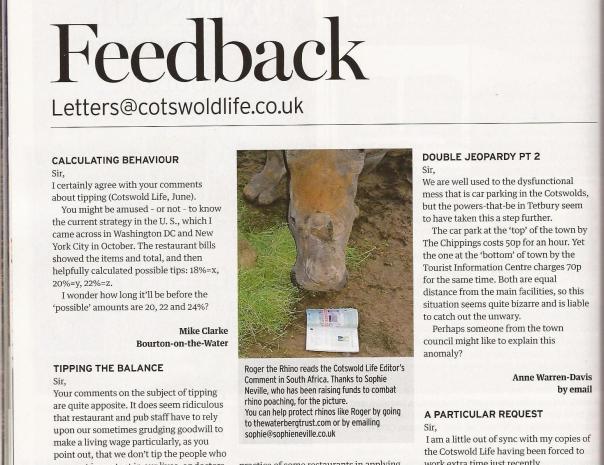 Barry Burles continued his TWT cycle ride initiative by holding another last Saturday! The cyclists came from the Cambridge Rugby Union Football Club and completed the same 82 mile route to Langham in north Norfolk. This time there was a head wind…
Barry was interviewed on Radio Cambridge, and did brilliantly, talking about the work of the Waterberg Trust. Jarrod Taylor, who took part, originates from South Africa and once played rugby for Border. Having just retired from the Cambridge rugby team, he was also interviewed on Radio Cambridge and gave his just giving link inspiring listeners to give.
To listen to the interview, broadcast at 15.45 on Radio Cambridge on 15th June, please click here

A transcript of the article in The Post by Marlene Vermaak:

After the success of 2015’s inaugural event, The Waterberg Trust (TWT) organised the second annual Waterberg Challenge Ride, which took place in March 2016, hosted this year by Ant’s Nest and guided by Ant Baber.

This exciting event, held to raise funds for various Waterberg projects, involved 12 experienced riders crossing 180km of Waterberg wilderness in 6 days. This year’s route went through Ant’s Nest, Kwalata, Lapalala and Jembisa game reserves. Funds raised will be going to Save The Waterberg Rhino and other community projects including the sponsorship of 125 local underprivileged children to attend The Lapalala Wilderness School.

The Waterberg Trust has already been able to help Save The Waterberg Rhino by funding the purchase of vital equipment, such as radios and a metal detector for the police officer dedicated to working with rhino poaching incidents in the Waterberg. Being a UK registered charity, TWT are able to access grants that are not available directly to South African registered Non Profit Organisations, and is able to make increase some UK donations by adding 25% Gift Aid. A number of the UK Trustees have long-standing links with the Waterberg and are committed to helping the people who work so hard running grassroots projects.
The first event hosted by Horizon in 2015 went from Horizon, Koshari, Ant’s Nest, and Lindani, to Jembisa, thanks to support from Shane and Laura Dowinton, David Baber, Dean van Heerden, Ant and Tess Baber, Sam and Peggy van Coller and Charles Whitbread. This sponsored ride raised fund for HIV/Aids programme support, involving  nurse training and two year support for an after school club at the Waterberg Welfare Society. This includes the rental of a house in Vaalwater for the homework facility. TWT was also able to support the Northern Education Trust, sponsoring a Waterberg student through accounting studies at Pretoria University. They are also raising money for Lethabo Kids Club in Leseding who run a much needed Back to School programme, providing school uniforms and more for primary school pupils. Riders were able to visit this project and the Lapalala Wilderness School while they were in the Waterberg.