The Waterberg Plateau rises to about 1,400 metres on Ant’ Hill: 4,500 feet above sea level. We covered some distance that morning, climbing an escarpment and riding across the game reserve as the sun beat down.

Although we had encountered a number of waterholes it was only when we reached the highest dam at noon that we took the chance to swim the horses.

They loved being able to cool down and play in the water. 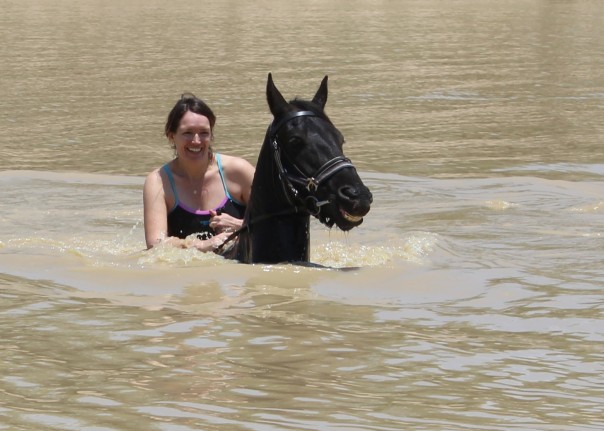 Later that day, when back in the saddle, we came across a herd of Livingstone eland that hadn’t been seen for some time. One of the cows was badly in need of veterinary treatment.

Ant Baber called in a helicopter to collect his game vet, Paul, and asked the riders if they would volunteer to help by following the eland once it had been darted with anesthetic. 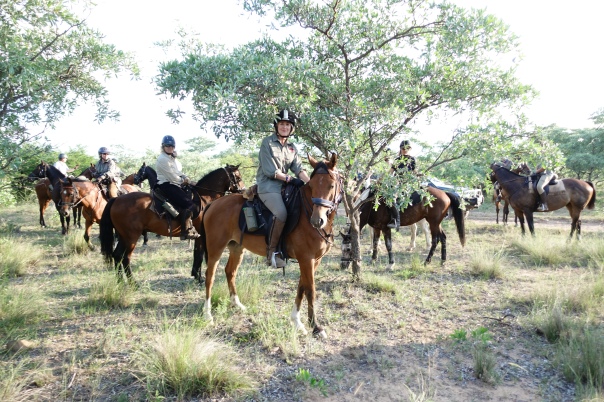 The riders and horses came into their own, cantering through dense bush after the herd of large antelope while the helicopter was buzzing overhead.

The vet was able to land in a clearing as one of the guides caught the female eland by the horns and calmed her with a mask before she received treatment to her wounded rear-end.

It was exciting to take part in the game capture and to be able to observe the procedure. The wound was caused by a tick infestation that had become critical. It would not have healed naturally. 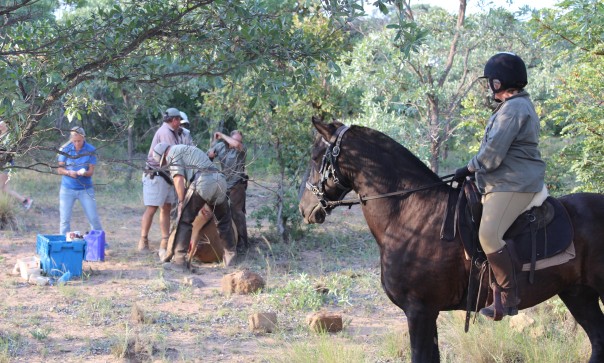 The wound was dressed and the cow  given anti-biotics, de-wormed and sprayed with insect repellent to increase her chances of survival, before being released back into her herd.

While the helicopter and vet were on hand, Ant decided to capture the eland bull and translocate him to another breeding herd as it is important to introduce fresh genes.

The riders were needed to help carry the anesthetized bull into the truck, which would transport him into a neighbouring area. Although sprayed for ticks, he was in excellent condition.

Although cantering some of the way, it was dark by the time the riders returned to the lodge when they still had to pack for the days ahead. The plan was to rise early and ride out of the reserve and across the Waterberg, heading north-west towards the Palala River.

You can get a feel for what it’s like to ride at speed through the African bush in this video: