The fourth day of The Waterberg Trust Challenge Ride 2018 was one of contrasts. We woke to clear weather although rain was forecast. This was welcomed as we had a long way to go and needed cool conditions.

We left Windsong Cottage, mounted our horses and rode to Boschdraai Primary School at the nearby Sesotho village.

The riders had brought pens and pencils for the 140 children who expressed their thanks by singing three very touching songs. Pupils have really appreciated books donated by TWT riders over the years. 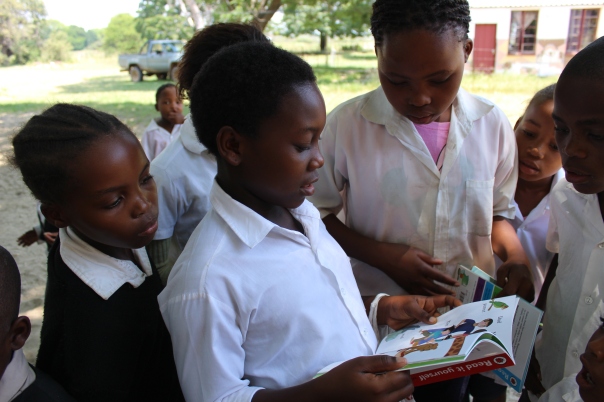 The headmistress, who has been working at the eco-school for 24 years, needs a new printer with ink cartridges. She needs set pupils work as she only has one other teacher and three classes of children.

We passed wild fig trees as we cantered down sandy farm tracks to Horizon Horseback’s game reserve and picked our way through the natural rock formations of Ghost Kopjie.

Fissures in the old red-standstone, said to be formed in the pre-Cambrian era some 4 millions years ago, is home to nocturnal creatures such as owls and porcupine.

At one stage it got too tricky for the horses but we had never taken this route before.

We had to double back a bit but we made it down to the grasslands below.

We saw jackal as we crossed the plans plains, took a break by a lake, and rode on down long marrum roads that run between game reserves. The vegetation became lusher.

Rain set in and the going became slippery but the horses kept cantering. 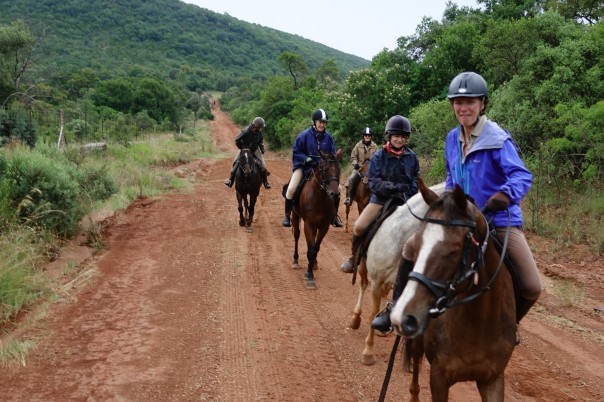 It was not long before we reached Lindani game reserve where the back-up crew had set up lunch in a paddock where we could unsaddle the horses and let them relax.

Ant warned us that there had been a crocodile attack on the nearby dam. 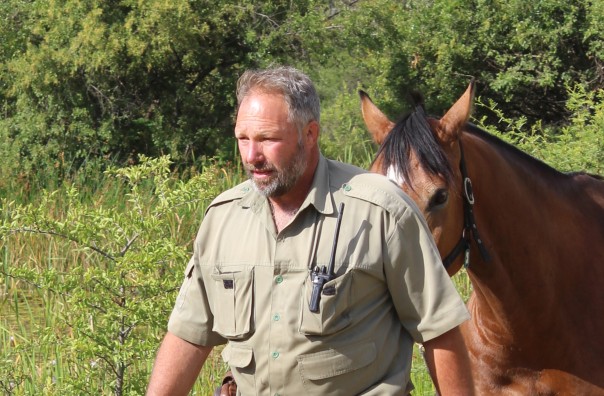 But it hadn’t been seen for a while and the horses were able to roam freely. 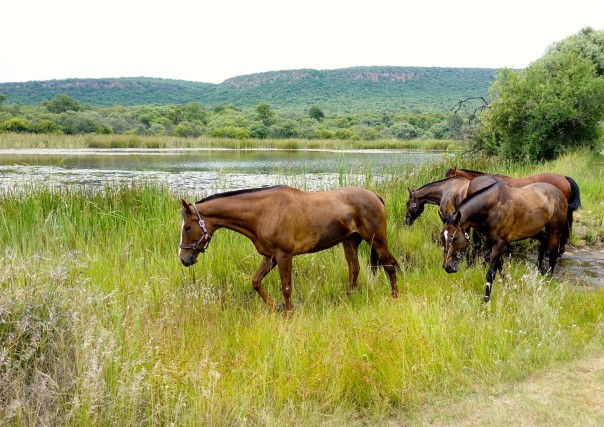 The riders enjoyed a barbecue lunch by the wetland.

Some were in need of reinforcements.

That afternoon we saw zebra, wildebeest and warthog as we cantered across the plains.

As we rode into a belt of acacia woodland we came across giraffe with young. 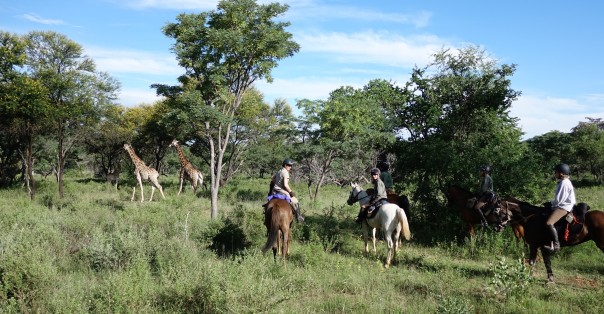 They allowed us close enough to take photographs. 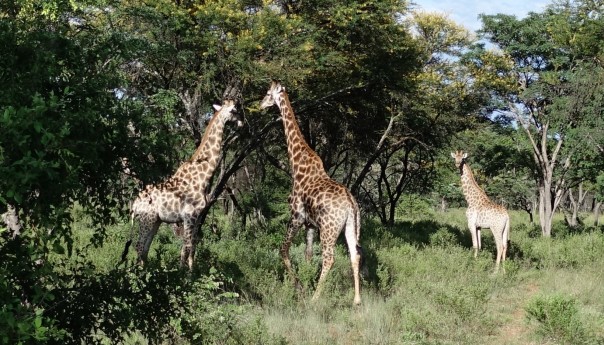 Giraffe have a different gait to other animals, although horses can be trained to walk as they do, which is meant to be more comfortable for the rider.

It was a long but varied day.  Sandy tracks across the reserve to Motseng Lodge.

We were thirsty by the time we reached the paddock where the horses were to spend the night but Ant and the riders were still smiling. 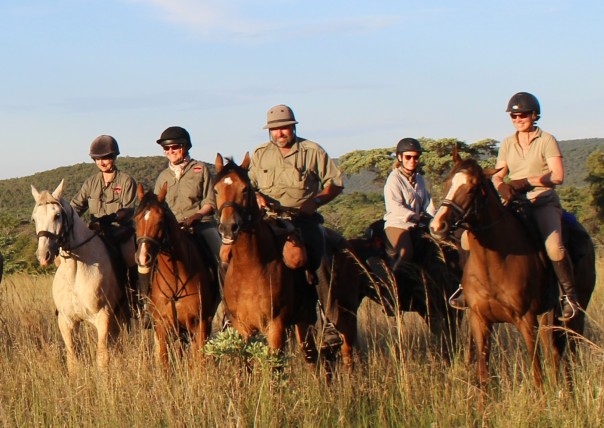 You can see a little of what Lindani is like and take a look at Motseng, the lodge where we spent the night here: 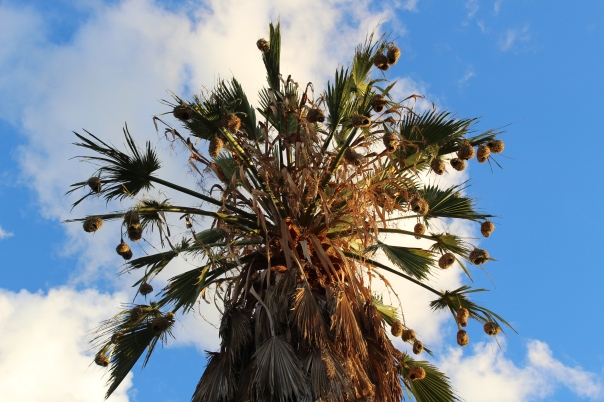 We were woken by weaver birds nesting above the lodge where we spent the night at Kwalata Game Reserve deep in the Waterberg hills.

We tacked up our horses, tying rain coats behind our long-distance McClellan saddles, and left head-collars underneath our bridles so we could tie the horses up in the bush.

We set off in good spirits and rode through Kwalata into Lapalala Wilderness, a private game reserve of approximately 100,000 hectares.

Since the Waterberg is on an intercontinental convergence zone there is a greater variety of trees and shrubs on Lapalala than in the whole of Western Europe. 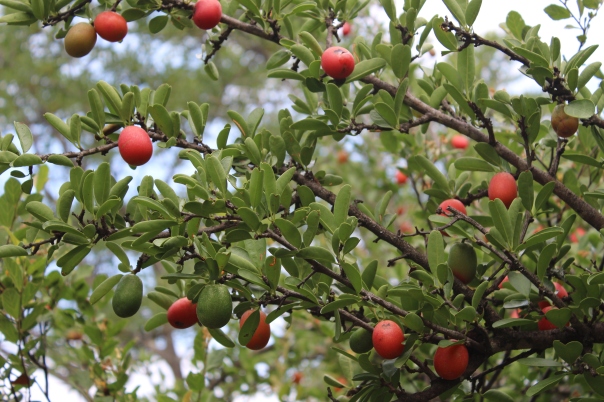 There is also a great diversity of birds, reptiles and mammal species with a range of different antelope from solitary steinbuck to herds of kudu.

The annual amount of rainfall can be pretty much the same as in London but in the Waterberg it usually only rains in the summer months with occasional downpours.

We enjoyed blue skies all day, walking beside the horses as we followed a rocky track down the escarpement as we made our way north.

We rode up a small river, making a number of crossings until we came across a dam where it was safe to swim. 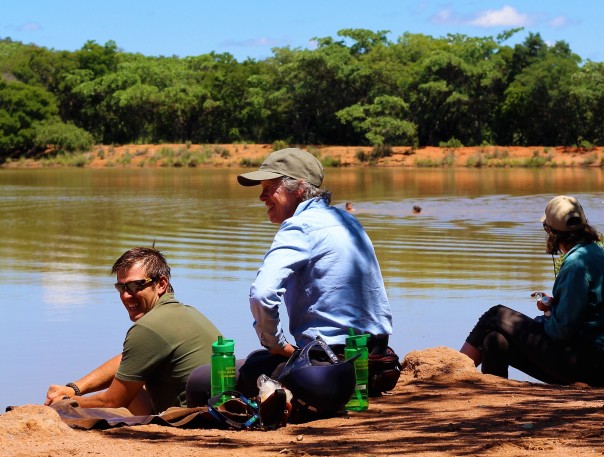 By this time our leader, Ant Baber needed a break. He had missed breakfast. 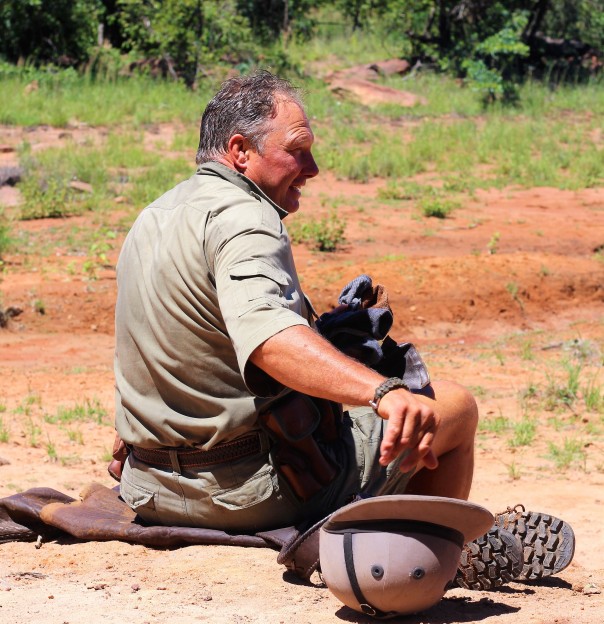 We rode on up the valley, coming to a bigger dam known for its population of crocodile and hippo.

The horses were able to take a long drink before resting for a few hours at mid-day. 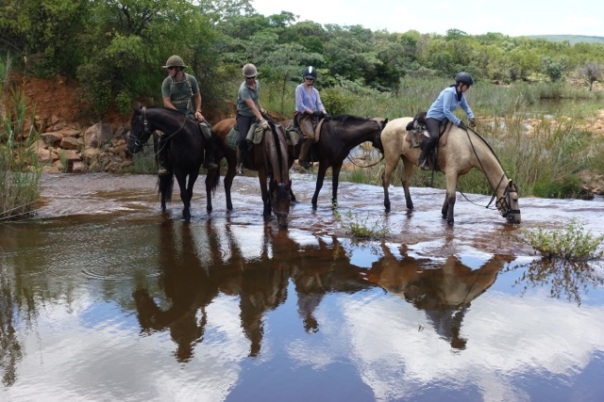 We were grateful to find table set out by the water with drinks and bowls of salad.

The riders, who were exhausted, appreciated the chairs and needed a sleep after lunch. 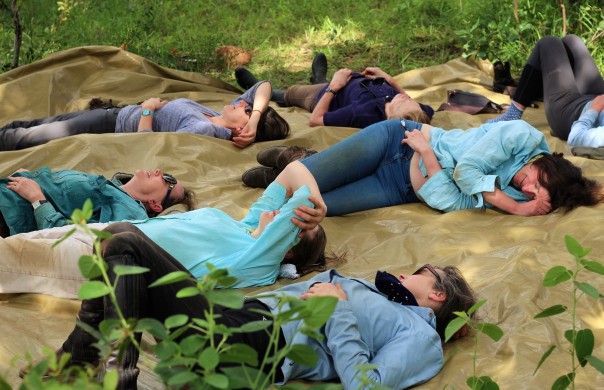 We opted to take the scenic route that afternoon, riding past herds of giraffe, impala,

kudu and wildebeest, while vervet monkeys were spotted in the trees.

GPS readings revealed that we covered a total of 41 kilometers on this day when we grasped just how wild the Waterberg is. 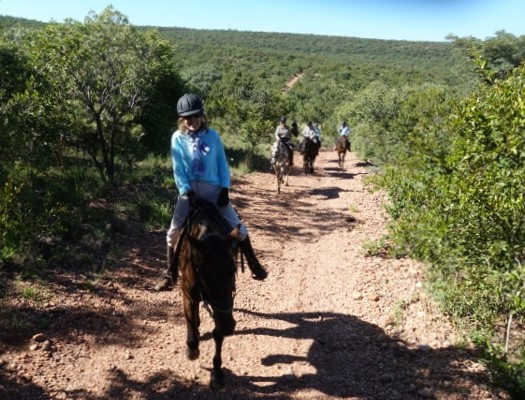 That evening the horses ate well, appreciative of the lush summer grazing. 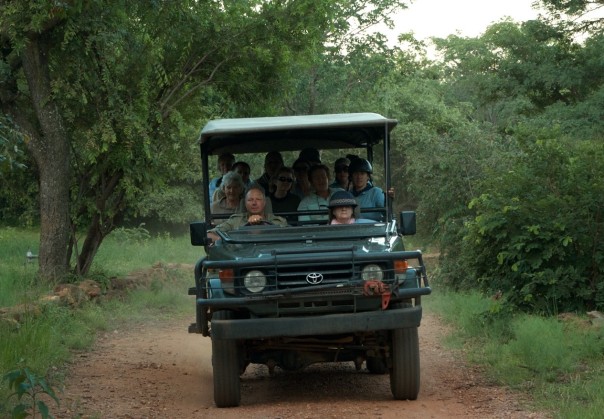 for a well-earned drink

and a swim at Kolobe lodge

before gathering around the fire

where they met up with the back-up team and members of Save The Waterberg Rhino. 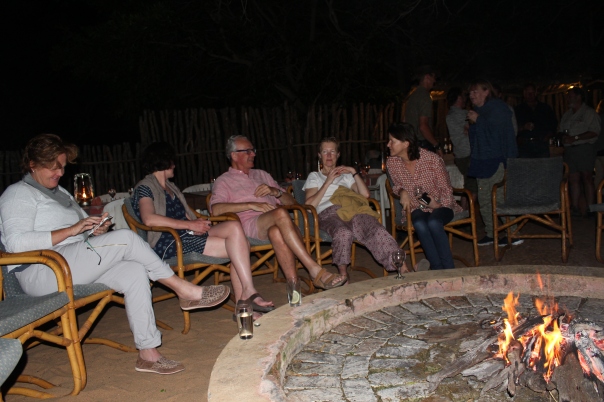 The director of Lapalala Wilderness School joined us, giving a short talk on what we could expect to see the next morning. 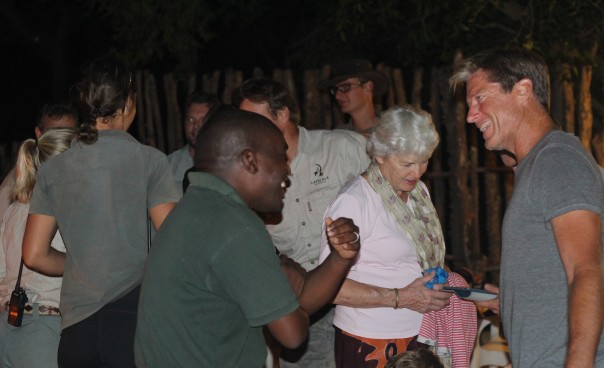 We started spotting wildlife the moment we drove in through the gates of Ant’s Nest, a private game reserve in the Waterberg. This young roan antelope was in our path. 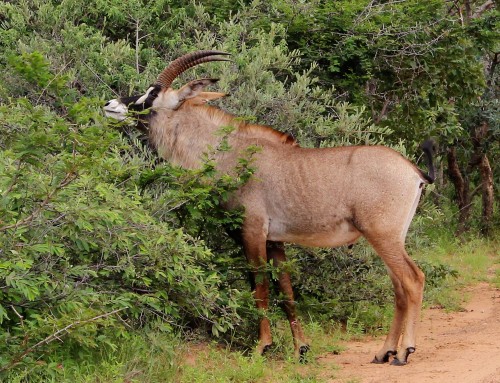 Twelve riders had flown out from the UK and Australia, at their own cost, to learn about the Waterberg by riding across the plateau with Ant Baber and his experienced guides,

TWT Trustee Sophie Neville, who was once a horse safari guide in the area, met the group at Johannesburg airport and explained about projects supported by the Waterberg Trust, as she accompanied riders on the expedition. 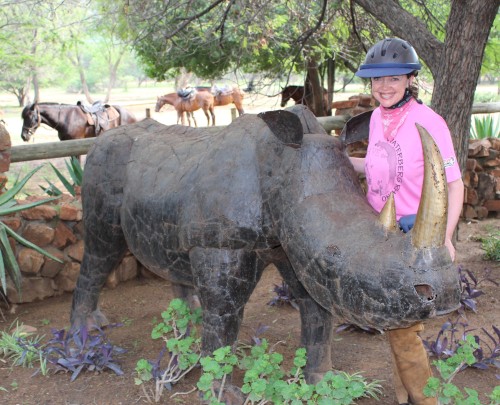 Although we covered some distance on the first afternoon, the important thing was for riders to try out their horses and get used to the long-distance saddles while there was still a chance to make changes. Juliet Maddan, who had gathered the group together, was also wearing a hot-weather helmet for the first time. 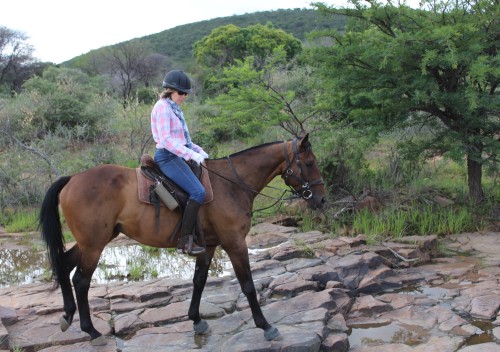 It was a delight to come across wild animals who are used to grazing in the reserve with the horses and allow riders to get very close. 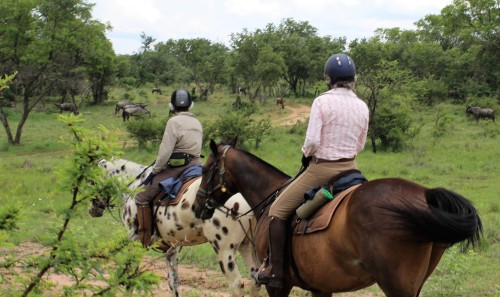 The wildebeest were unperturbed by our presence and the horses were relaxed. 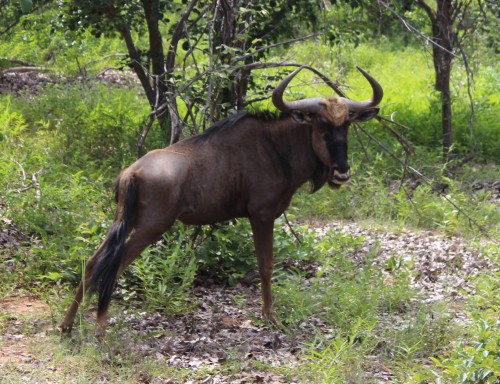 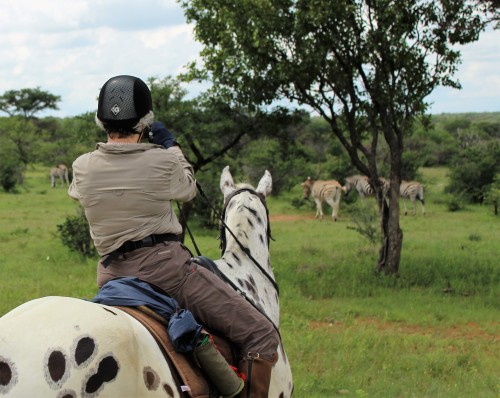 Some riders came across white rhino with Ant Baber that very afternoon, and were able to learn a bit about their territorial behaviour.

Disaster struck at the end of the day when a gasket blew on a landcruiser as it was going up a steep slope. With no engine power the vehicle slid backwards but the riders were fit and jumped out as the guide steered it into a bush. It proved the start of an adventurous week.

That night there was plenty to talk about as we gathered around the fire and made plans for the long ride ahead of us. 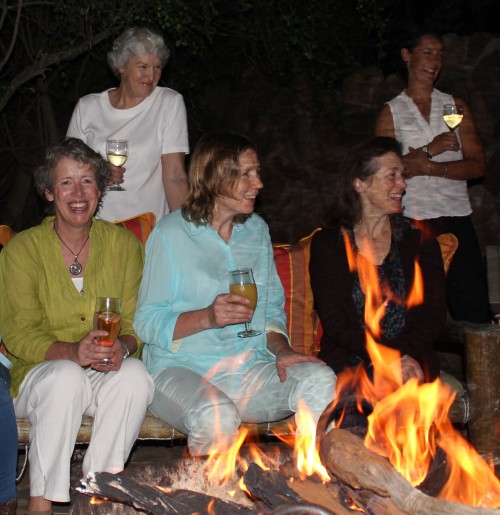